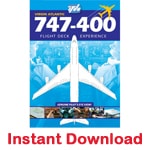 In this detailed look at the Fokker 100 you join the Chief Pilot (Fokker fleet), Captain Ian Lawrie and First Officer Euan McLean.

Your journey begins at East Midlands International Airport (EGNX), in the crew dispatch office for pre-flight preparations where Ian and Euan begin with a detailed briefing for the flight.

Next we join Ian at our aircraft (G-BXWE) for a guided tour of the externals of the aircraft. We then move on to the flightdeck for the round trip to Nice Cote D'Azur Airport (LFMN) in Southern France. We depart EGNX using runway 27 and during our outbound sector (BD289) Ian is Pilot Flying and gives you lots of information regarding the aircraft, systems and operation.

On our return sector (BD290) Euan is Pilot Flying for a zero flap take-off from LFMN runway 04R. Ian describes in detail the Navigation Log and fuel calculations and Euan takes you through the overhead panel in detail. We'll then settle into the descent for a Cat IIIa Autoland into East Midlands runway 27. During the flight you will not only see just how the aircraft is flown but will be able to follow Air Traffic Control, see the briefings and the checklists and procedures carried out in the cockpit on a scheduled airline flight.

About Captain Ian Lawrie
Captain Ian Lawrie commenced flying lessons aged 16, completing his first solo flight on his 17th birthday. In order to advance his flying hours and total experience, Ian spent some time in Vancouver, Canada prior to training to become a flying instructor on his return to the UK. Ian worked at a flying school specifically involved in ATC Flying Scholarship contracts in addition to instructor training.

Upon completion and issue of his professional licence, Ian moved into general aviation charter flying before joining British Midland as a First Officer in 1986 on the Shorts 360. The DC-9 series 15 & 32 followed with his first Command being attained after type conversion on the BAe ATP.

1990 brought a return to instructional flying with appointment as a Line Training Captain with subsequent qualification as Type and Instrument Rating Examiner following in 1991 (aircraft and simulator). During 1993 British Midland ceased operations of the BAe ATP. Orders for a mixed fleet of Fokker 70 and 100 followed and Ian joined the team that introduced this new type into the company.

The Fokker 100 aircraft entered British Midland service in 1994. Since then Ian has been involved in all aspects of Company pilot training, later being appointed to the post of Technical Pilot, which included Certificate of Airworthiness flight testing. Appointment to current position of Chief Pilot (Fokker fleet) was in 1997. This role combines office/management duties with continued involvement in flying training in addition to responsibility for pilot recruitment.