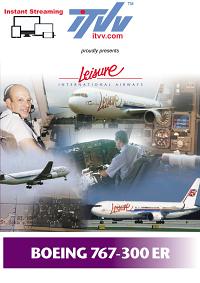 In this documentary-style programme we join Captain Guy Stephenson, Virgin Atlantic's B747-200 fleet manager, Chief Flight Engineer Alan Bonnick and First Officer Adrian Thurley on flight number VS005/6 from London Gatwick to Miami, Florida and the return journey to Gatwick. En-route Guy, Alan and Adrian will guide you around the various systems that make this a truly "Classic" Jumbo aircraft.

In addition to seeing and hearing all key aspects of the flight and aircraft operation from the aircrew's perspective, this multi camera shoot programme will introduce you to such systems as the INS (Inertial Navigation System), Selcal which is a selective calling system and is part of the aircraft communications system and many others.

Alan will give you a detailed tour and explanation of the Flight Engineers systems panel, encompassing the engine secondary instrumentation, electrics, fuel, hydraulic and air conditioning panels. Then join Adrian who will provide you with an insight into the many systems which go to make up the overhead panel. Guy will take you through topics such as TCAS (Traffic Alert and Collision Avoidance System), NATS (North Atlantic Track System) and a flight progress Chart.

This programme is suitable for anyone who is interested in how these aircraft fly. A truly educational programme for all to enjoy on one of the world's best loved airliners.

About the Aircrew
Captain Guy Stephenson is the fleet manager for Virgin Atlantic Airways Boeing 747-200 aircraft. Guy was an Undergraduate at the Loughborough College of Technology, where he obtained a Diploma (Hons) in Industrial Chemistry.

In 1958 he became a pilot officer in the Royal Air Force and obtained his wings in January 1960. Several years later he became a Squadron Pilot of 213 Squadron in the Allied Tactical Airforce in Germany. Developing his flying career in 1966, he became a Pilot for the British Overseas Airways Corporation, piloting the Boeing 707 fleet.

In 1975 Guy obtained his Command on the B707 and is also an Authorised Examiner for the CAA. He later became a Base Training Captain on the B747-400. In his spare time he is to be found sailing, playing tennis, squash and skiing.