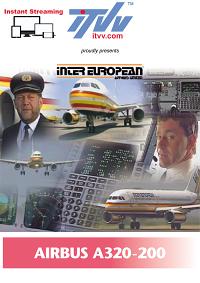 Captain Alan Dix, Chief Pilot of Inter European Airways, invites you to join him and his crew on the flightdeck for an unparralled insight into how this modern airliner is operated and flown on a regular flight across Europe.

The programme was filmed using 4 cameras to give you an unparalleled view of take-offs and landings, including external shots, during the round trip from the UK to Greece.

In addition to seeing and hearing all key aspects of the flight and aircraft operation from the aircrew's perspective, this multi camera shoot programme you will see and hear the full briefing for the take-off from Birmingham, along with checklists, ATC clearance, procedures needed in the event of an emergency, together with descent and arrival into Zakinthos.

Alan takes time during the flight to give you details of how the aircraft is operated and flown. Amongst the many systems discussed are: Fly-by-wire, ECAM (Electronic Centralised Aircraft Monitoring), EFIS (Electronic Flight Instruments System), PFD (Primary Flight Display), how to program and understand the FMGS (Flight Management and Guidance System), Meteorology, Weather Maps, Navigation, Electrics, Hydraulics, Fuel Systems, aircraft performance and many more subjects.

Whatever your interest in airliners and aviation, this is a truly educational programme for all to enjoy.

About the Aircrew
Captain Alan Dix was the Chief Pilot of Inter European Airways, flying the Boeing 757 and Airbus A320. He has the unusual distinction of holding the CAA type rating examiner status on four of the most modern glass cockpit civil airliners: Boeing 737-300, Boeing 757, Fokker 100 and Airbus A320. Alan learned to fly with the Royal Air Force, becoming a Q.F.I. He was previously an examiner on BAC 1-11s with Dan Air, and Fokker 100 fleet manager with Air Europe. Alan maintained an early interest in aerobatics and he was National Aerobatics Champion (Intermediate) in 1978 and even took a years sabbatical from the airlines to join the world famous Rothmans Aerobatic Team, flying in the number 3, left wing position.